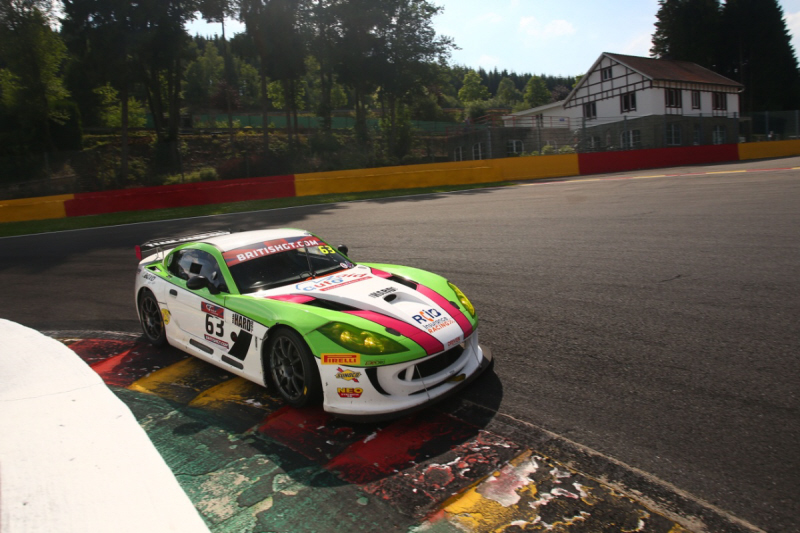 Wisbech driver Jake Giddings raced to a top 10 British GT4 Championship result on only his second appearance of the 2017 season at Spa-Francorchamps in Belgium over the weekend, joining fellow Briton Matt Chapman at Autoaid/RCIB Insurance Racing.

After making his first outing of the year with the team at the end of May, partnering Michael Caine in the squad’s No.36 entry at Snetterton, Giddings was called-up to join first year GT racer Chapman to race the No.63 Ginetta G55 GT4 during the sole overseas event of the British GT campaign.

Lapping strongly in testing, and preparing well for the event’s two 60-minute races, the team-mates went on to finish 10th overall in GT4, seventh in the Silver class, in round seven on Saturday, 8th July, despite having been bundled down to 18th place at the start of the race following contact.

Frustratingly, they didn’t even get to take the start of round eight later in the day when a problem with the stubs on one of the Ginetta’s wheels left cause for concern over the possibility of a potential accident – a wheel having already become detached after the chequered flag in race one.

While disappointed to miss out on being involved in race two, Giddings was happy enough with the pace of the Ginetta G55 across the weekend and is hopeful of continuing to partner Chapman when the championship resumes at Brands Hatch in the UK next month.

“There’s nothing planned at the minute for the next round, it was good working with Matt and I think we make quite a good pairing”, said Giddings, “He’s a quick and consistent driver and we gelled well, so we’ll have to see what unravels and see if I’m back in the car for Brands.

“To be honest the car felt good, we changed the set-up a couple of times in free practice and then just missed out in quali – it just didn’t work out for us for some reason. Our race pace was good, what we thought it would be, and we really looked forward to race two after coming through pretty well in the first one after the contact.”

Giddings added: “On the cool down lap from the first race one of the wheels snapped off, we were lucky it didn’t happen a couple of laps earlier at Eau Rouge or somewhere – that would have been a biggie. The team fixed it for the last race but then we saw two stubs were off on another wheel. I wanted to race but, in the end, it was safer to park it and prevent the possibility of a big accident.”

Team-mate Chapman qualified the No.63 Ginetta for round seven, lapping seventh fastest in the session on Friday afternoon to secure a row eight start. Also taking the opening stint, Chapman got away well from the rolling start but as he turned right at the La Source hairpin, contact from the sister Autoaid/RCIB Insurance Racing Ginetta ended realistic hopes of a GT4 podium challenge.

Dropping to 18th position, Chapman did manage to recover some ground before the mandatory driver change pit-stop which came at the end of the second of two Safety Car periods which largely dominated the first half of the race.

Handing the car over to Giddings with just over half an hour to go from 13th in GT4 and eighth in the Silver class, the Cambridgeshire driver emerged onto the track retaining the overall placing but also an improved seventh in the Silver category.

Climbing into the top 12 of GT4 within a handful of laps, passing the No.54 Nissan, Giddings then profited from a spin for one of the McLarens to move into 11th position. Maintaining his place just outside the top 10, Giddings then broke into 10th spot with only a couple of minutes to go as a result of a pit-stop for Joe Osborne’s McLaren. In the Silver class, Giddings was classified seventh.