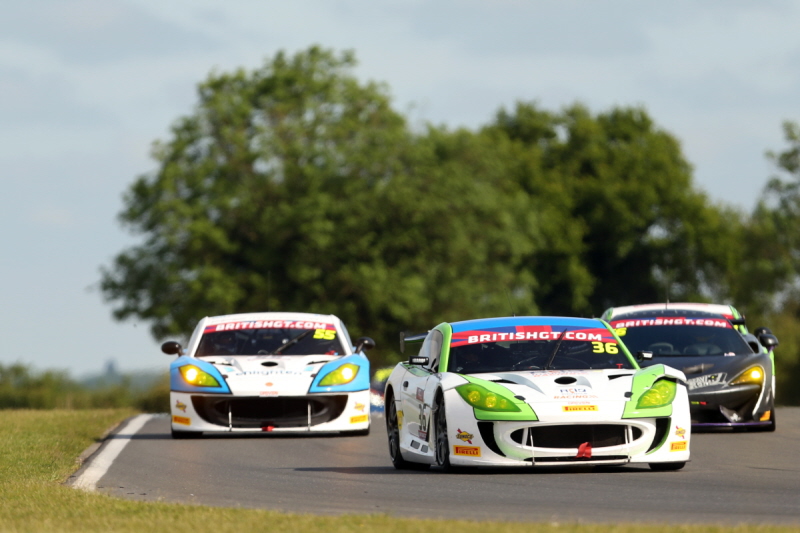 Jake Giddings, the 2014 British GT4 Champion, made a welcome and long overdue return to competitive action at Snetterton 300 Circuit over the weekend, 27th/28th May, after signing an eleventh hour deal to partner Michael Caine at the Autoaid/RCIB Insurance team.

Marking Wisbech-based Giddings’ first competitive outing since the final round of last year’s championship back in September at Donington Park, the 22-year-old relished being back in action at his home track and he and Caine took a best result of fourth in the Silver Class in race two.

Having piloted an Aston Martin V8 Vantage for the past three seasons in British GT, the weekend’s event at Snetterton – the third race meeting of the 2017 campaign – was his first behind the wheel of a Ginetta G55 GT4 car with the Autoaid/RCIB Insurance Racing squad.

“It was a last-minute deal really”, said Giddings, “We do speak to Tony [Gilham – team principal] and he called my Dad to say he needed a driver for Snett to partner Michael. I got plenty of experience over the last couple of years of following Ginettas, so it’s been nice driving one for a change! It’s a proper race car, the front end is so responsive and the car reacts to everything you do.

“It was nice to get the car properly sorted for the last race, as we had quite a few problems with a misfire and an alternator issue during qualifying and the first race, but there’s definitely a lot of potential there and I think Michael and I worked really well together. It’d be nice to be back out again at some point this season, we’ll have to wait and see what happens.”

Caine took the first of the two qualifying sessions on Saturday, determining the grid order for round four, and posted the seventh fastest time, sixth in the Silver Class. Giddings, standing in for Caine’s regular team-mate Mike Newbould, had the round five session compromised by a misfire, though, which limited him to an uncharacteristic 16th quickest and seventh in Silver.

In the first of Sunday’s two 60-minute contests, Caine held seventh in GT4 throughout his stint and when the mid-race driver change pit-stops began to be served the former British GT3 Champion stayed on track, climbing into third, before handing over to Giddings.

Frustratingly, though, an issue with the alternator in the pit-stop cost a huge amount of time and Giddings was finally able to join the race down in 14th position. As a result of continued problems with the car cutting-out during the second half of the encounter, Giddings coaxed the No.36 Ginetta to 16th place and eighth in the Silver class.

Hoping for much more from round five, Giddings began the race and got involved in a terrific three car battle with the sister No.63 entry as well as one of the Century Motorsport Ginettas. Swapping places lap after lap, Giddings managed to work his way into 11th place in GT4 prior to handing the car over to Caine pretty much as soon as the pit-stop window opened at the 25-minute mark.

Caine held 12th position prior to the appearance of the Safety Car shortly after the pit-window closed and racing only resumed with around 15 minutes to go. With the Ginetta G55 working well and not showing any legacy of the problems from race one, Caine was able to steer the car to an eventual finish of ninth in GT4, fourth in the Silver class.

“It’s a shame we couldn’t get the car sorted until race two but we showed more what we were capable of”, said Giddings, “I’m really looking forward to hopefully working with Michael again at some point, we learnt a bit off each other this weekend and without any problems I think we make a very good Silver pairing.”