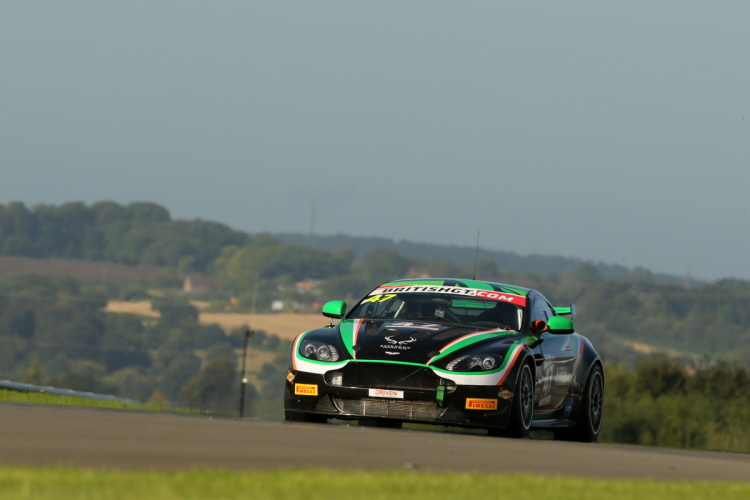 Aston Martin racer Jake Giddings ended his 2016 British GT Championship campaign with his fourth outright GT4 points finish of the season during the final race of the year at Donington Park Grand Prix Circuit on Sunday, 11th September – his seventh score from nine races in the Pro-Am class.

Wisbech-based Jake, a former GT4 Champion, emerged from a challenging and somewhat character building season, his third in British GT, seventh in the Pro-Am Championship with ever improving team-mate Kieran Griffin.

In Sunday’s race Jake performed strongly in his stint, the second hour of action in the 120-minute contest, but after losing his ear piece he was unable to have the benefit of key communication from the JWB Motorsport team over the ship-to-shore radio system.

Making the task of defending position in GT4 while allowing faster GT3 class cars through all the more challenging, in the end the 21-year-old took the final chequered flag of the season in 10th place but a post-race penalty for a rival elevated the No.47 Aston Martin V8 Vantage into ninth spot.

“This season wasn’t as good as last year for us unfortunately”, reflected Jake, “We seemed to lose some pace towards the end of the season and we’re unsure why, but Kieran has improved massively as a driver. It’s been tough, one of those years.

“In my stint I was driving round on my own really. At the end the Porsche was catching us, I let an Aston past as I didn’t think he was for position but then he stuffed me up – so I overshot the hairpin and then the Porsche went for a massive lunge, otherwise it would’ve been P8 in the end.”

With the ‘amateur’ drivers starting the two-hour race, Griffin was tasked with the first portion of the contest and from 12th on the GT4 grid he held position on a busy opening lap before the Safety Car was deployed on lap three following an early tangle involving two GT3 cars.

When the action resumed on lap five, he came under threat from the Ginetta of Aaron Mason and subsequently slipped to 13th place in GT4. Edged back another spot soon after, the Irish TV, Finesse Paving and Civil Engineering, Cowley Road Garage and Toppesfield liveried Aston Martin then moved back into 13th on lap seven as a result of an issue for a rival.

With just over half an hour complete Griffin was back into the top 12 but then slipped a place again before the driver-change pit stop window opened at the 50-minute mark. Staying out initially, as several others served their mandatory stops, the JWB driver climbed into fifth in GT4 before handing the car over to Jake.

When he emerged from the stop, the former GT4 champion held 14th position in GT4 with pretty much exactly one hour of racing left on the clock and he did everything he could to close down the significant time gap to the cars ahead.

Swiftly making his way into the top 12, he then climbed into 11th with 40 minutes left and broke into the top 10 before the final half hour. With just 20 minutes to go, Jake had halved the gap to his next target and into the last quarter of an hour he climbed into ninth place.

Late on, after letting an Aston Martin past which wasn’t racing for position, Jake was badly baulked at Melbourne Hairpin which enabled the Porsche Cayman of Scott Malvern to make a late dive for the place, edging Jake back to 10th at the flag – although that became ninth again post-race as a result of the penalty for a rival Ginetta.

While the British GT Championship has now concluded for another year, Jake will be racing again this coming weekend, 17th/18th September, at Silverstone National Circuit in the Renault UK Clio Cup for his family’s Finesse Motorsport squad. He last appeared in the one-make ‘tin top’ championship at Oulton Park in June.