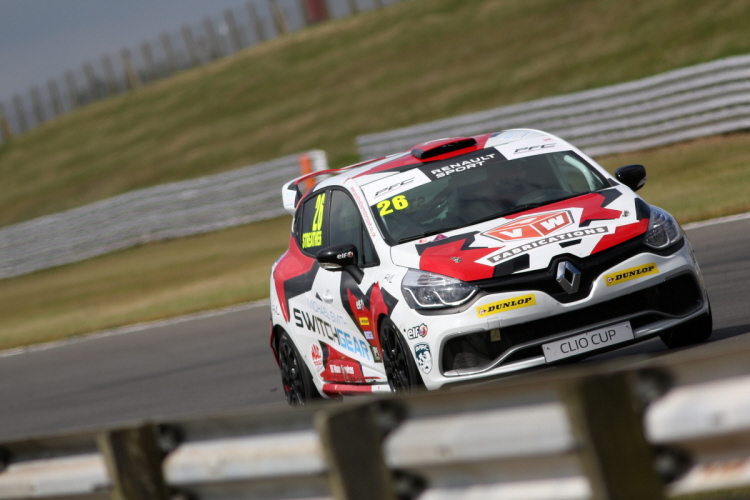 One month since the Renault UK Clio Cup was last in action, the fast-paced championship is preparing to resume at Rockingham in Northamptonshire this coming weekend, 27th/28th August, where race-winning squad Finesse Motorsport is eyeing something of a late-season resurgence.

Setting its sights on an overdue podium challenge in the high-profile Dunlop MSA British Touring Car Championship feeder category, the Wisbech squad and race-winning driver Paul Streather are placing full focus on qualifying performance which, in recent rounds, has been an Achilles Heel.

Finesse, of course, started the 2016 season fantastically well with Streather during the championship curtain-raiser at Brands Hatch in early April when the rapid Renault UK Clio Cup rookie scorched to an outstanding race victory in the first race of the season.

Although racking up healthy points scores during each of the subsequent race meetings, Streather’s challenge has been impacted on two fronts – illness at Oulton Park in June seriously undermined his competitiveness and unrepresentative qualifying outcomes have left a huge amount of hard work to do in the races.

Even so, the Leicestershire driver goes into rounds 13 and 14 of the 18-race season still inside the coveted championship top six and only 27 points outside the top four. With the clear race pace to be back in among the podium positions at Rockingham, silverware is the target at the Corby venue.

“I like Rockingham, we went well at the Media Day [in March] and I have raced there two or three times before”, said the Michael Smith Switchgear and AVW Fabrications-backed racer, “The race pace is there, everything is there to be honest, we just need qualifying to work out – if we can be on the top two or three rows of the grid we can definitely challenge for the podium.

“We’ve had some very good races this year, picking up a lot of places, so we know we can race well, I just need to help myself out more by qualifying higher up the grid. We need some more time spent working on qualifying, weather dependant that’s the plan for the test day on Friday.”

For team principal Neil Giddings, confidence in Streather’s ability has been steadfast throughout the year and with the overtaking opportunities Rockingham affords he is confident the 27-year-old will be a strong challenger for top results at the weekend – but he hopes for a qualifying boost.

“We all know what a great racer Paul is, he’s done a fantastic job this season in the races and has always come through the order strongly – it’s qualifying where we’ve struggled a bit”, commented Giddings, “We know what we need to do at Rockingham, as long as the weather is dry on the test day we’ll be working on qualifying to give us the best chance of a podium. Race pace is no problem.”

Officially timed pre-event testing will take place at Rockingham on Friday, 26th August, with qualifying beginning at 11.20 on Saturday, 27th August, followed by race one of the weekend at 16.10. On Sunday, 28th August, round 12 will get underway at 13.00 and will be screened live on ITV4 with streaming online at www.itv.com/btcc