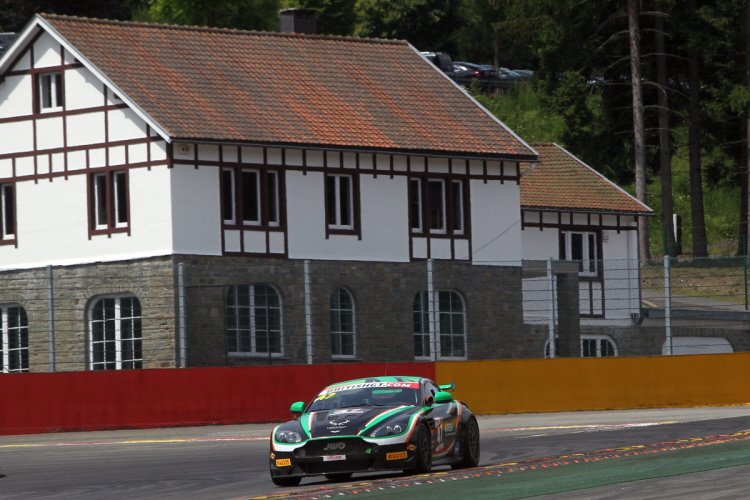 Hopes of mounting a GT4 podium bid during round six of the British GT Championship at Spa-Francorchamps on Saturday, 9th July, ended in frustration and disappointment for Jake Giddings and team-mate Kieran Griffin when race-long electrical gremlins limited the duo to a top 12 finish.

At points of the two-hour contest, which featured a huge grid of 57 cars combining GT3, GT4 and guest GT4 European Series cars, Wisbech 21-year-old Jake was able to deliver top three pace at the wheel of the No.47 Aston Martin V8 Vantage.

More often than not, though, intermittent electrical problems affected performance and the issue came to a head with just a few minutes of the race remaining when the dashboard went completely blank. Fortunately, able to make it back to the pits, Jake was then able to rejoin the race before the chequered flag to post a top 12 result despite the dramas, eighth in Pro-Am.

“We had the electrical problem all race, it kept coming and going but near the end the dash display went and cut out”, explained Jake, “Luckily I was near the pits so I managed to get the car in, then the team got us back out into the race to at least take a finish.

“The problem was manageable but it just depended how bad it was lap to lap. I overtook the leading Ginetta, which was a lap ahead of us, and we had top three pace but then the electrics played up again so I let them back past. The car was fine all weekend up until the race, FP1 was cut short so Kieran lost vital track time there but his pace in the race was OK. It’s a shame we had the problem.”

Running in the top five of GT4 during practice on Friday, 8th July, rainfall later in the day just prior to the ‘Am’ qualifying session resulted in all of the teams fitting wet-weather Pirelli tyres before the cars ventured out onto track.

In challenging conditions, Griffin posted the 14th best lap in British GT4 with a time of 3m04.450 seconds and when Jake took over the Aston Martin for the ‘Pro’ session he circulated in the class top six with a quickest lap of 2m49.642 seconds on a drier track surface.

On combined times, the Irish TV, Finesse Paving and Civil Engineering, Cowley Road Garage and Toppesfield liveried car started Saturday’s race from 13th in GT4 with Griffin taking the opening hour of action. Moving up into the top 12 straight away, Griffin climbed into 11th place a few laps later and ran behind a train of GT4 European class cars up to the driver-change pit-stop.

After several other British GT4 cars served their stops, Griffin handed over the Aston to Jake from seventh in class with 58 minutes of racing complete. Holding 10th place when he joined the track, Jake set about trying to make up ground on the cars ahead but the electrical woes limited the pace.

Still managing to hold onto a top 10 placing as the race neared the two-hour mark, at the end of their 41st lap Jake pitted as a result of the dashboard problem and re-joined with enough time remaining to finish eighth in Pro-Am, 12th overall in GT4.

There is now a four week break from race action with the British GT Championship resuming over the weekend 6th/7th August at Jake’s home track, Snetterton 300 Circuit in East Anglia, for rounds seven and eight of the campaign.

“I think we should be alright at Snetterton, I’m obviously looking forward to be being back there”, he added, “There’s a chance we might have a test day before the race which would be ideal so we can iron out the problems from this weekend and get rid of any technical issues.”