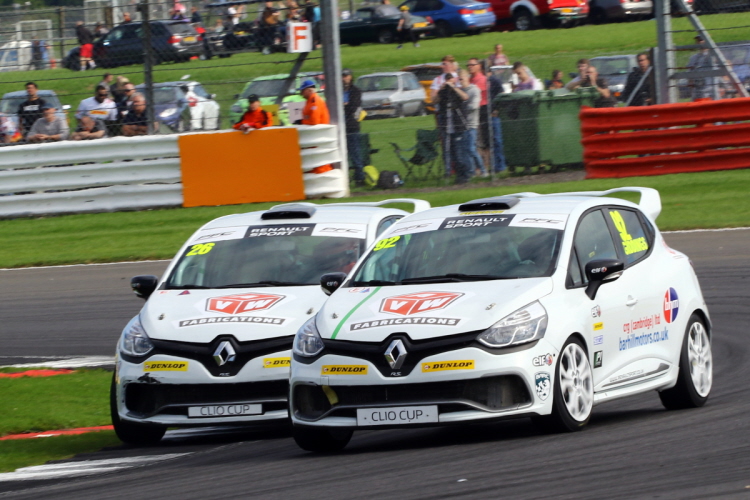 Finesse Motorsport driver Paul Streather produced a real headline performance at Silverstone over the weekend, 17th/18th September, after bouncing back from a monumental accident in Renault UK Clio Cup testing to post a brace of ninth place results from back-of-the-grid starts.

Serving up a true masterclass in overtaking during rounds 15 and 16, Streather’s performances were all the more impressive on two fronts. Not only did they come after the hefty impact in practice, in which his original race car was written-off, he managed to achieve such strong results – and also set the fastest race lap of the weekend – in a replacement Clio he had never previously driven.

Special mention must go to the 20Ten Racing squad, without whom Streather wouldn’t have been able to get onto the grid regardless of obtaining medical clearance after his shunt. Loaning Finesse one of its spare Clio Cup cars, 20Ten travelled back to its Derby base on Friday to bring the Clio down to Silverstone in time for qualifying on Saturday.

In Finesse’s second car, Jake Giddings made only his third appearance of the season in the category and raced to a best finish of 12th position in the opening contest. Performing strongly, like Streather from lower than anticipated starting slots, the British GT Championship regular’s bid for a top 10 finish in race two came unravelled when he was served with a track limits time penalty.

“It’s been a weekend we won’t forget in a hurry, that’s for sure!”, reflected Finesse team principal Neil Giddings, “Paul’s accident on Friday was massive, a really big hit and the car was an obvious write-off. Fortunately, he wasn’t badly injured and Simon [Hunt] and his boys at 20Ten were great loaning us their spare car and bringing it down from Derby.

“Our boys did a fantastic job to get the car prepped for qualifying and the races and Paul did an unbelievable job, to overtake so many cars and set fastest lap in race two was outstanding. Jake had to fight through as well after qualifying didn’t go to plan, he raced really well and was only a fraction away from Paul’s best lap. Both of them had the race pace to be right up there at the sharp end.”

The severity of his testing accident, which actually snapped the car’s rollcage, left Streather with a lot of pain from his left ankle but after receiving the all-clear from the local hospital, he was free to take part in qualifying and the remainder of the race weekend in the replacement car.

Both Finesse drivers enjoyed an outstanding first lap to round 15, Giddings gaining no fewer than six places to brilliantly break into the top 10 while Streather was equally as impressive to gain seven positions into 12th place.

Giddings and Streather continued their climb up the order on lap two, moving into ninth and 11th respectively, and the latter – in an unfamiliar replacement car remember – posted the fastest lap of the race at that point on the fourth tour.

With absolutely nothing to split the majority of the field, positions remained set past mid-distance but on lap 10 a midfield shake-up enabled Streather to climb into the top 10 just ahead of Giddings and also set the scene for further progress from the former.

Continuing his incredible drive by climbing into ninth and then eighth on laps 12 and 13, Streather was edged back a place with just over three laps to go but the result marked a truly exceptional performance and a gain of 10 positions on his starting slot. He only just missed out on the fastest lap of the race by a mere seven hundredths of a second.

Giddings remained just outside the top 10 until an, unlucky for him, lap 13 when he was shuffled back to 13th place. Able to break back into the top 12 as a result of a late race spin for a rival, he lapped with pace a match for the podium.

With it all to do again in the televised second race on Sunday, round 16, Giddings started in 16th position with Streather three places further behind and the former put together a terrific opening lap to gain five places and move into 11th spot.

Breaking into the top 10 the next time around, Giddings was soon joined by Streather who carved his way through from 18th at the end of the first lap into 11th position by the end of lap three. With both Finesse drivers impressing with their respective rise through the order, Streather then posted the fastest race lap of the weekend on the fifth tour – a time of 1m04.963 seconds.

Getting ahead of his team-mate on lap seven, Streather then held ninth all the way to the flag on lap 18 with nothing to split the pack of cars immediately ahead. Giddings, meanwhile, ended the race in 16th as a result of a highly unfortunate track limits time penalty but proved his pace once more with the fastest Graduate Cup lap, a time of 1m04.983 seconds.

There are now only two weeks to wait for the final two rounds of the Renault UK Clio Cup season at Brands Hatch Grand Prix Circuit in Kent, over the weekend 1st/2nd October.